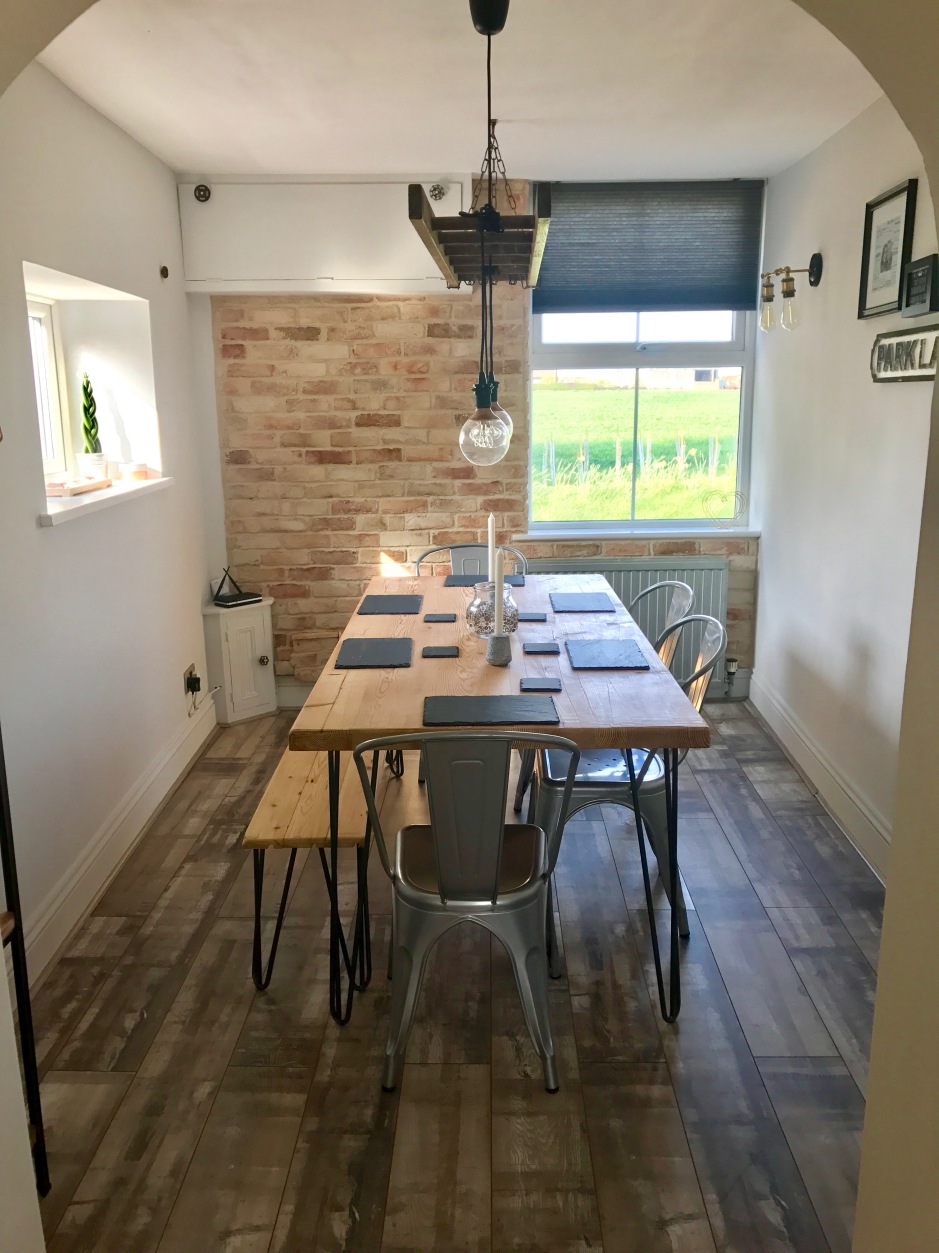 Well I feel this post is long overdue we seem to have been working on our dinning room forever every time we would start it there would be something go wrong either in the dinning room itself or with another part of the house. Anyway I’m glad to say it is now finished (other than my picture wall that will grow as & when I find things for it).

When we originally spoke about decorating the dinning room we were thinking because its open plan from the kitchen we would have to stick with the farmhouse/country style  theme that our kitchen has however, the more places we would visit for food and drinks the more we wanted an industrial style dinning room. At New Years we stopped in Chester for a few nights and one lunch time we visited Urbano 32 (they make amazing Pizzas if you are ever near I would definitely  give them a try) the restaurant had exposed brick, logs around the wood-fired pizza oven & a mixture of wood & metal. When we were sat eating our pizza’s we both had the same thought if we are going ahead with the industrial theme this is the way to do it.

We have exposed brick in our living room and I love it! I thought there was no way of creating that in the dinning room, I didn’t want the brick style wallpaper but Dave said he would be able to sort it. He found some brick slips from a company on eBay. I am really lucky in that Dave can pretty much turn his hand to any DIY so what ever idea pops into my head he seems to be able to do it.

We were really lucky that the previous owners of the house left us a solid wood farmhouse table & chairs. We didn’t want to get rid of such good quality furniture so we decided to up-cycle it to fit in our new dinning room. Dave removed the top, planed it and  then rubbed it with Rust-Oleum clear finishing wax. We bought some metal legs from eBay and he attached them. With the remainder of the wood from the table he made a bench.  The chairs are from eBay too I’ve said in previous posts how Dave loves an eBay find. 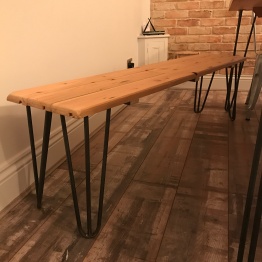 The light fitting Dave made from a vintage ladder, some chain and three lights from Ikea. I love it because its one of a kind. Everybody that has seen the dinning room since it has been finished comments on the light fitting, Dave probably won’t agree but it didn’t seem to take him long to put it all together.

I have written previous blog posts about both pieces of furniture the shelves & the drawers.

The lamp was from Aldi, the plant was from B & Q, the frame was from Paperchase.

My plan is to just keep adding to the photo wall as and when I find images/prints. Although I love my light fitting it does not produce much light so these wall lights solved that problem (eBay find again). The candle holder is from H&M I have two on my table. 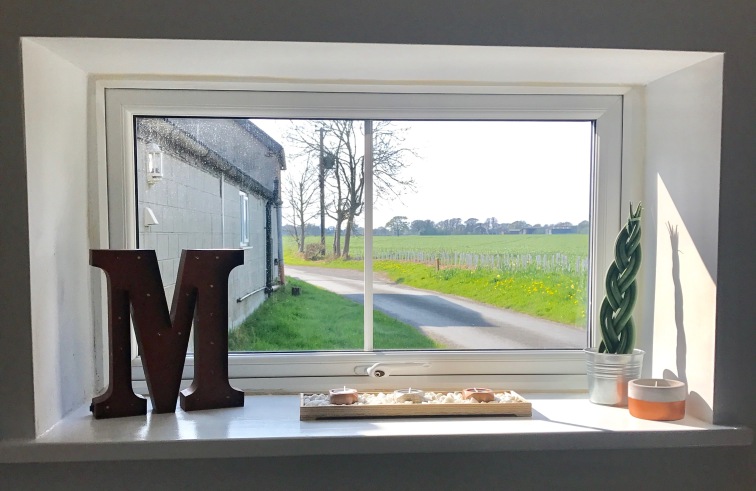 We have two cupboards that have to be in that room so we added old plumbing valve handles from the USA  so that they were in keeping  with the theme of the room. The M is for Mollie from Next (she loves it because it lights up) the plant is from B&Q (I love bringing the outdoors in). 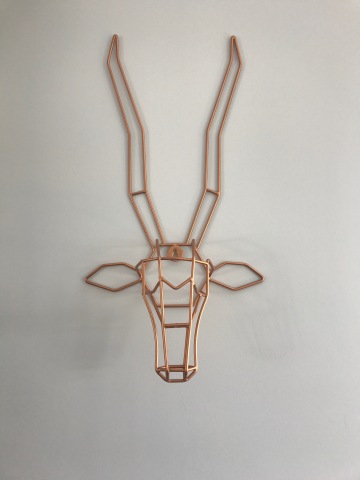 I love, love, love the antelope head from Oliver Bonas. I made the vase myself out of a vase from IKEA and vintage watch cogs (it took ages but I think it was worth it).

The dinning room is now my favourite room we used to eat all our meals at the breakfast bar in the kitchen not any more. I’m super proud of Dave for creating what I had envisioned & putting up with me trying to explain my crazy ideas, I love it.

As I have said in my previous post Ikea Hack my dinning room had to be done on a budget we really wanted a new dinning room but our money had to be spent elsewhere (damp proofing etc).  I’m going to be writing a blog post on the dinning room as a whole very soon now it’s all finished but before that I want to share with you one of the ways I created an industrial style piece of furniture from an eBay find.

Dave loves a good eBay find its a blessing and a curse, some things he finds are awesome like this chest of drawers others get put into storage never to see the light of day again or there is the day he came home with a speed boat (yes a full sized speed boat). Anyway I’m not going to dwell on that we all have our shopping habits his is eBay mine is a never ending wish list.

As soon as I saw the drawers I knew exactly what I wanted to do with them. I didn’t want the handles so my first job was to remove them and fill in the holes they had fitted in. I then used Rust-Oleum chalky finish furniture paint. I’ve used the Rust-Oleum paint before and really like it as there is no prep work to be done. The colour I used is Anthracite it fits in with my dinning rooms industrial theme really well. It took two coats and I did sand in between each coat but that was due to my painting skills (or lack of) rather than the paint itself. I bought the 750ml tin but used less than a quarter of it (I guess I will have to find something else to paint).  After I painted it I used Rust-Oleum furniture finishing wax in clear it’s a really easy product to use you simply rub it on with a cloth and that really is it, I did this twice. I already had this wax from previous projects and a little goes a long way so I still have lots left for my next ones (bedroom furniture).

I left it for about a week while I waited for the handles that I had found on eBay to arrive. They were just what I wanted but with a twist. Originally I was just going to have all the same basic cup handles but I found an eBay shop that had lots to choose from so I decided on these.

I spent more than I’d originally planned to on handles but I’m glad I did as they finish the drawers off perfectly.

Check Out My Past Blog Posts